Manchester Cricket Ground or Old Trafford Cricket Stadium is one of the busiest cricket ground in England. The city is densely populated after London and is known as the hub of domestic tournaments. According to the Old Trafford Cricket Fixture, the ground always seems busy. Natwest T20 Blast, National T20 Cup and England Cricket team matches and Specsavers County Championship.  Royal One-Day Cup, The Hundred and The Women’s Hundred entertainment coming soon.

The opening match of the cricket summer 2020 will begin with the Maryland Cricket Club match against the home side. Old Trafford Cricket Stadium is the home to Lancashire who will compete in first-class, List A and domestic Twenty20 tournaments. According to the England Cricket Schedule 2020, two international games scheduled at Old Trafford. Australia and Pakistan will tour England during this summer for Test, One-Day and Twenty20 format matches.

As per Australia Tour of England, the 2nd T20 International on July 5 and will commence at 11:00 local | 10:00 GMT.  Another great entertainment coming as per Pakistan Tour of England, the 2nd Test of the series scheduled at Trafford Ground. The second Test is the part of the ICC Test Championship that will end in 2020/21. The opening game of the first-class Specsavers County Championship season will begin between Lancashire and Kent. In the mid of summer on June 7, Natwest Vitality Blast will begin.

The top 5 highest totals scored at Old Trafford Cricket Ground are just 300+ runs which clearly stats that pitch isn’t that much scoring. Previously highest runs at this ground were 318/7 by Sri Lanka against England which SL win quite comfortably. During the recent WC 2019, the top two highest scores have been recorded at this ground. While in a match between England and Afghanistan, ENG scored 397/6 in 50 overs.

Eoin Morgan smashed a thriller century with 148 runs off 71 balls with 17 sixes and 4 fours in his innings. Rashid Khan on the other end conceded 110 runs in his 9 overs spell that’s the highest ever by a spin bowler. Cricket fans around the globe have witnessed another nail-biting contest between New Zealand and West Indies. While batting first NZ scored 291 runs with Kane Williamson 148 runs. 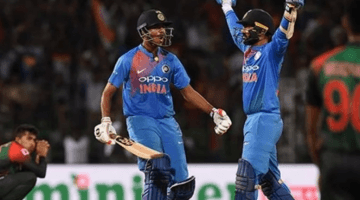