David Andrew Miller is commonly known as David Miller. He is a middle-order batsman, occasional wicket-keeper and right-arm off-break bowler with left-handed batting style. Miller made his domestic first-class career during SuperSport Series during 2007-08 for Hollywoodbets Dolphins and he also represented List A cricket, Knights, and KwaZulu-Natal.

He captained the South African team in T20I against Pakistan in February 2019. When Faf du Plessis was rested for the last two T20Is of the series. Miller became the first South African and 3rd overall after Rohit Sharma and Kieron Pollard to play 100th One Day International without featuring a Test Match. He formed a partnership of 95 runs with Rory Kleinveldt at the 9th wicket.

Miller formed a record highest partnership of 256* at the 5th wicket with JP Duminy in the One Day International during the World Cup. He is the first batsman overall to score a T20I century while batting at number five or lower.Â  Miller is the 5th South African player to score 1000 runs in T20I.

He made his debut for Kings XI Punjab in the Indian Premier League during IPL 2012. He retained by the same franchise until the most recent IPL 2019 season. Miller made the 3rd fastest century in the IPL history when he smashed 101* not out off 38 balls. He completed against Royal Challengers Bangalore at the IS Bindra Stadium, Mohali.

Miller was named for Winnipeg Hawks during the inaugural edition of the Global T20 Canada cricket tournament, but tournament canceled.Â  He has made his debut for Â Chittagong Vikings ŕ¦šŕ¦żŕ¦źŕ¦ľŕ¦—ŕ¦ľŕ¦‚ ŕ¦­ŕ¦ľŕ¦‡ŕ¦•ŕ¦żŕ¦‚ŕ¦¸ŕ§Ť) in the Bangladesh Premier League during BPL season 2013. 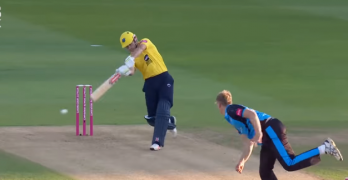